Click here for all interviews with members of the competing teams. 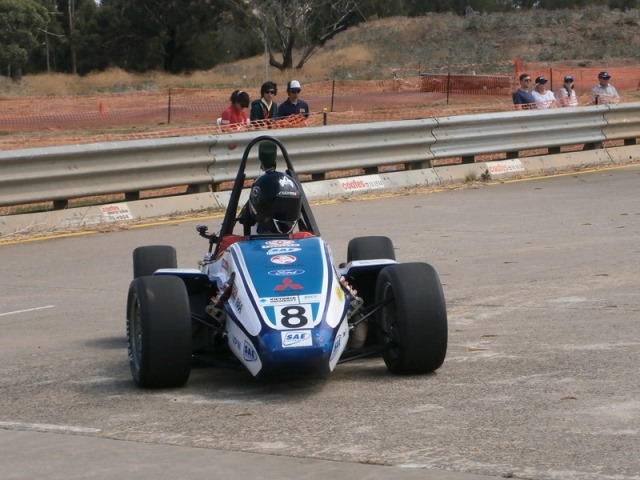 The static events consist of all non-driving events that test the students professional development and business skills. The team here at Engage did our best effort to showcase the talent and work ethic of this years Formula SAE students.

The presentation event requires students to apply some business sense to the design of their car. They must convince a panel of judges that the design of their car would be feasible, if the car was to be mass produced. We caught up with Heather &amp; James from the University of Queensland, who won the event by edging out Monash University with a very polished performance. 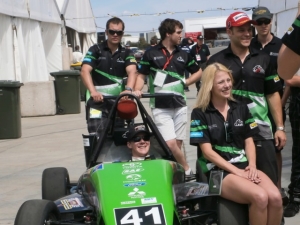 Heather recalls her joy when the team asked her if she was interested in taking charge of the presentation event. “The team thought I would be a good candidate and I was screaming out for them to give me the responsibility.”

The two engineering students had very specific tasks to take care of, allowing each of them to streamline their focus. Where Heather’s input required meticulous planning and a polished delivery, James had to take a more fluid approach to be able to handle any questions the judges would throw at them.

Despite her need to be structured and well organised, Heather decided against memorising large chunks of material. “I’m not a fan of memorising the content of a presentation as it comes across as less genuine than being able to express your knowledge or ideas on the spot. However, I stick to the structure of the powerpoint slides and just let if flow on the day.” James prefers to memorise only the key aspects of what he wants to communicate, allowing his “mental babble” to fill in the rest.

When asked to what degree presentation skills can be ‘learned’, James provided a speedy response. “Most of it is learnable. Some people are naturally suited to it but it is something that can be built up over time. Any moment that you spend speaking in front of an audience that understands the content of your presentation, there is pressure to ensure you are confident and well researched. Luckily i’m a bit of a show-off and enjoy speaking in front of large groups.”

Heather reminds us that amazing results take concerted effort and the right strategy. “While we only started working on it two weeks ago, we really condensed a years worth of work into that time, having daily practice sessions and getting very useful feedback from alumni students during mock presentations that we held. On the morning of the presentation, I rehearsed it almost thirty times in my head.”

The cost report is another static event which further emphasises the need for teams to consider the design of their car from a practical and business point of view. First year engineering & commerce student Gaurav, from the University of New South Wales (UNSW) explains how the team pinched first place by a bare fraction.

He begins by discussing the benefit of taking on responsibility, even if you are not entirely ready for it. “The team encourages involvement from new students which gave me confidence in taking on the task. It actually drew me into the team and got me more involved from midway through the year. Up to that point I had been a fairly casual team member.”

The cost event is scored based on the presumed cost of building the car as well as the presentation of these figures. While UNSW’s car was not the cheapest, it managed to beat all others with a superior presentation. “Achieving the lowest cost was not possible, however we knew we could reduce how much the car appeared to cost through our method of costing. Encouraging the designers of each part to cost it themselves, improved our accuracy and proved to be a much more effective approach. I focused on the details & clarity of the presentation.” 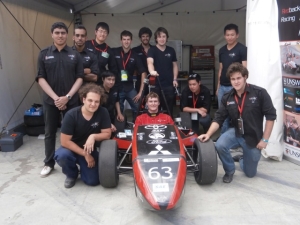 After success in the cost event, Gaurav lifts his gaze into the next 12 months and contemplates what he may be working on. “This year I lacked the in-depth knowledge to tackle the technical side, however I really want to contribute to this area in future years. The cost report has improved my understanding as I had to go around and learn every component in the car and how they all relate to each other. I look forward to helping out whoever takes on the static events next year, particularly any new students that join the team.”

The dynamic events involve the cars being tested at their limit on track in a series of configurations. Most drivers in the dynamic events are also team members who have worked on designing and building their car.

We tracked down the quickest feet in the west to learn how he put down the fastest acceleration time at this years competition. The acceleration event is a 0-75 metre straight line drive from a standing start. The winning team was the Western Australian based Edith Cowan University (ECU), and the man in the drivers seat was team member John.

“I have some experience with drag racing which helps me feel comfortable when lining up for this sort of event. There was a noticeable lack of grip off the line during yesterdays session, which meant we had to put more focus into the launch control system. I tend to spend a lot of time with the computer, analysing all the data and set-ups.”

When we mistakenly assumed John would be driving in the endurance event, he responded before he heard the end of the question. “Nah, we have some amazing drivers who will be taking care of that event.” It seems that John only likes to travel in straight lines and we suggest he uses this method when he takes the lengthy voyage from the western part of Australia to the north-eastern corner. “I have a job lined up with KRE in Queensland. They build and service race engines for the V8 Supercar series. I can’t wait to work in the Motorsport industry and hopefully move onto bigger things.”

2012 has been Monash Universities most impressive performance at the Australasian FSAE competition, achieving an enormous 899 out of a possible 1000 points. Highlighting their incredible success was a scorching hot skid pad time set by team member Drew, the suspension leader and driver. 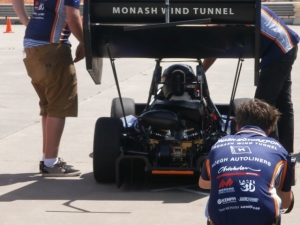 Drew immediately felt comfortable with the balance of the car out on the skid pad track. “Thats the best that I have ever felt the car in skid pad. Usually I have to tap the brake to bring the front of the car around, but during that run I could hold constant throttle and steering. We put a lot of energy into the set-up for this event and it seemed to work. Driving the car and feeling how changes affect it’s handling capabilities has definitely improved my understanding of vehicle dynamics.”

Unlike many of the students attending this years competition, Drew’s career plans do not necessarily involve the hectic world of Motorpsort. “I generally like to keep work and my passions separate. Im not too fussy about where I could work, I just enjoy engineering in general.”

He attributes Monash Universities consistently brilliant performances to the following team principles. “Our design ethos is to keep it simple, build it quickly and get a lot of testing done. We also make an effort to document everything and pass on as much knowledge as we can to new team members, ensuring we operate as a sustainable team.”

The endurance event requires quick consistent lap times as well as high fuel economy for the best score. As these two variables are in conflict with one another, it is easy to comprehend the difficulty of putting down a fast time whilst conserving fuel. The other aspect to consider is how the drivers must continually produce fast laps while avoiding the tight bends and infinite sequence of cones.

Queensland University of Technologies (QUT) Swedish exchange student Martin replays the tight and sometimes “scary” course layout he faced during his stint. “Its a very fast and open track, but approaching the hairpin it is very tight. Coming from very fast speed and chucking the car into a tight space is really scary but a lot of guys do it really well here.”

Martin reveals the reasons he chose to complete his exchange studies at QUT. “I chose QUT as it has links with my University back home and because it is based in Queensland. It’s nice and warm up there, compared with the cold in Sweden. The way the teams operate here is very similar to back home. The major difference between Sweden and Australia is the restriction placed on students in Australia by the universities as far as safety regulations. In Sweden it is much more open.” 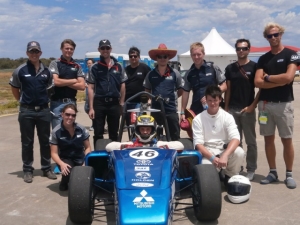 Martin’s passion for engineering is not only limited to race cars. “As a mechanical engineer, anything that moves and makes a sound is good enough for me. There are two large truck companies in Sweden that have shown interest in me. That’s probably where my focus will be.”